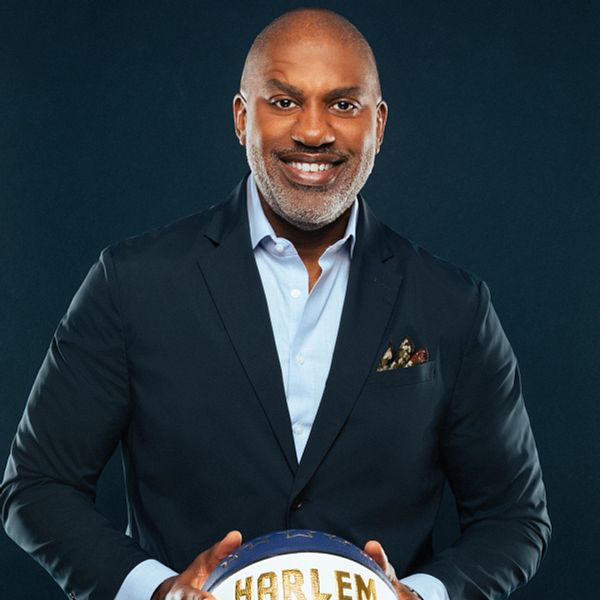 ROAD TO BRANDWEEK: TAKING THE HARLEM GLOBETROTTERS BEYOND THE BASKETBALL COURT

When a brand has been around for nearly a century, what else is there to do?

For Keith Dawkins and the Harlem Globetrotters, the answer is more. The basketball exhibition team has relied on its famous live shows since its birth in 1926, but is now looking for new ways to reach consumers.

The Globetrotters have a distinct history composed of basketball dribble tricks, slam dunks and four-point shots mixed with hijinks all to the tune of the classic Sweet Georgia Brown whistle. It’s how the Chicago-born brand has entertained fans of all ages.

With players dancing on the court while showing off high-flying athleticism, the style of a Globetrotters live show is somewhere in between an NBA basketball game and a Ringling Brothers circus act.

Although the Globetrotters’ brand identity is firmly set, the team can’t coast on its legacy. The most important goal for the basketball outfit is increasing visibility and reaching new consumers—and that means evolving from a live event business into a global entertainment brand.

Earlier this year, Dawkins was hired as the president of the Globetrotters by parent company Herschend Family Entertainment. The Globetrotters were purchased in 2013 by Herschend, which added it to its other attractions such as Dolly Parton’s Dollywood theme park and Adventure Aquarium.

Previously, Dawkins ran his own brand as founder and CEO of Rock Hill Media Ventures. He also spent 17 years at Viacom, becoming evp at Nickelodeon. There, Dawkins launched the Nickelodeon Sports initiative, where he cultivated strategic partnerships with sports leagues such as the NFL, NASCAR and the MLS.

Now, Dawkins is looking to do the same with the Globetrotters.

The Globetrotters are a powerful touring operation domestically and internationally, but Dawkins also wants fans to be able to experience the basketball entertainment without having to attend a live event.

“The shift is about moving the Globetrotters to an intellectual property that does other things beyond the tour,” he said. “If we’re successful in doing that, the tour is bigger than ever.”

To reach an even wider audience, the Globetrotters have explored different brand partnerships especially in the apparel space. First was a partnership with headwear retailer Lids announced earlier this year as part of Lids’ “They Gave Us Game” initiative, where three Black sports institutions would have apparel and accessories sold year-round at more than 700 Lids stores.

The brand also worked with streetwear creator Undrcrwn on a capsule collection of clothing in June.

Heading into its 2022-23 slate of live games, the Globetrotters are partnering with a slew of brands. Sub sandwich franchise Jersey Mike’s is the Globetrotters presenting partner for the season. Several deals with apparel brands including Hybrid Apparel, Junkfood Clothing, 19nine and Sprayground are also in the cards for both 2022 and 2023.

“I am both excited and humbled when big national global partners want to get on board with us,” Dawkins said. “That means they are entrusting their brand with us. They’re seeing the value in the Harlem Globetrotters. They see the value of who we are past, present and future.”

The Globetrotters have tried new ways of reaching consumers, including getting into NFTs. The Globetrotters partnered with rapper, actor and entertainer Snoop Dogg and social media influencer Junebug on an NFT sitcom, Da Dogg Gone Gym.

“In today’s world, just doing traditional advertising isn’t going to cut it,” said Lisa Delpy Neirotti, an associate professor of sports management at George Washington University. “You need to be creative. You need partnerships. You need influencers. You build these relationships that share target audiences. That is a new way of marketing.”

For the Globetrotters, the two goals for partnerships are visibility and brand alignment. Dawkins wants partners to know the brand is open for business and potential business deals.

All of these different focuses—apparel, gaming, NFTs—is to reach different demographics by offering something for everyone.

“Not every single one of those streams are right for the different audiences that we cater to,” Dawkins said. “There’s a 45-plus crowd, there’s a Gen Z crowd, there’s a kid and family crowd that all consume the Globetrotters brand in different ways.”

Diversity, equity and inclusion is an integral part of the Globetrotters’ basketball history and the brand’s DNA. From the start, the team was comprised of an all-Black roster who began performing during a time of segregation—19 years before Jackie Robinson broke the color barrier with the Brooklyn Dodgers—and the persistence of Jim Crow laws.

Breaking down discriminatory barriers is another continuing aspect of the Globetrotters’ existence. Dawkins pointed to the brand’s signing of Lynette Woodard in 1985, the first time a woman played on a men’s professional basketball team.

“We are goodwill ambassadors,” Dawkins said. “We’re doing social impact work in the areas of health and wellness, education and community empowerment, which is our three strategic pillars. We were diversity, equity and inclusion really before it was being used.”

One other edge the Globetrotters have over other basketball leagues is their tricks on the court. Neirotti sees this as a potential opportunity for the brand to reach young consumers. The Globetrotters post Friday fan trick shot videos on TikTok and have used World Trick Shot Day as a vehicle to drive interest in the brand.

“It’s all additional free branding opportunities for the Globetrotters,” Neirotti added. “I would go down that path of consumer generated content.