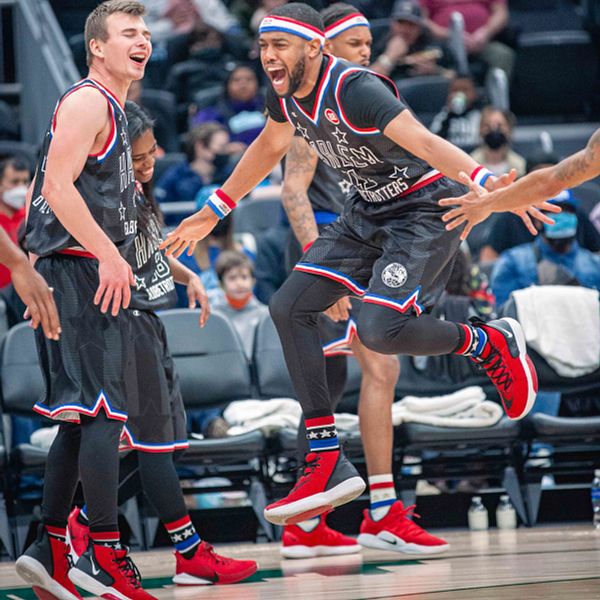 Friday, March 18, was no ordinary night on the road during the 2022 Harlem Globetrotters Spread Game Tour in Fargo, North Dakota. It was lights out as 11-Year Veteran, Cheese shot (22) 4-pointers during the game.

The Harlem Globetrotters’ 4-point shot, 35 feet from the basket and nearly 12 feet from the standard 3-point arc, has been used in over 2,4000 games since the team introduced the shot in 2010. 4-Point Specialist, Chisholm not only set a new team record, he did it with remembrance of Harlem Globetrotter legend and basketball pioneer, Fred “Curly Neal, with the number 22.

All season long, the team has honored basketball legend and Harlem Globetrotter, Fred ‘Curly’ Neal, who proudly wore the #22 for 22 seasons on the team. Curly’s impact on the game of basketball extends beyond the court and the team continues to pay homage to his legacy.

Growing up, Cheese was often told that his smaller stature would prevent him from realizing his basketball dreams, but he has always enjoyed proving people wrong. He tells kids dealing with adversity to, “Stay mentally strong, and know who you are as a person.” He also knows a star of his magnitude can have a great influence on a child. “When I was seven years old, Muhammad Ali walked into my barber shop,” says Cheese. “He gave an autograph and a kiss on my forehead. That’s something I will never forget.”

Cheese captained his high school basketball team and went on to become a two-year letter winner at Ball State University, where he graduated with a degree in communications. Reaching goals is something he tells young people to visualize daily. “Write down all of your goals on a big piece of paper, and tape them to your wall, so you can see them every day,” says Cheese. “You will need to work hard, but you should never lose sight of those goals, because they are right in front of you in big letters.”

Since becoming a Globetrotters’ star, Cheese has brought his fancy footwork, deft ball handling and 4-point shooting accuracy to all 50 states across the U.S. and over 60 countries. In March of 2020, he appeared on Kevin Hart’s popular “What the Fit” series, along with his Globetrotter teammates and Jimmy Kimmel.